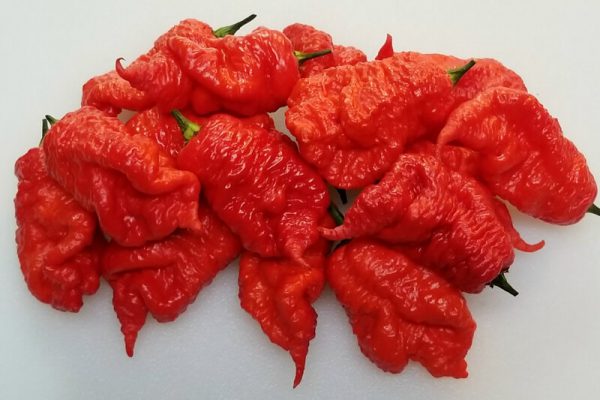 The Death Spiral or Death Pepper is a variant of the Naga Bubblegum Red cross from the United Kingdom originally made by grower Terry Smith. We first saw this on a number of plants in 2015-2016. It does not have the bleeding calyx like the Naga BBG 7. But it does have a reticulated pattern on its outer skin which look like grooves were etched into it.

The Death Spiral peppers are unigue in that they ripen in multiple color stages. They start out at light green but go to peach, then orange and finally red. The peppers get a pointy end but sometimes a tail as well. The heat is above most Naga types and flavor is floral fruity. It has an upfront burn so beware. Its consistency is not known so you may get many varied shapes and sizes. The Death Spiral chile plants grow over 4 feet tall.